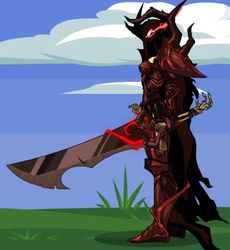 Description: Two powerful strikes, one to HP and one to MP.

Effect: First, tries to steal 15% of enemy HP (high chance); then follows up with a 75% damage attack.

Effect: Two hits of 100% base damage; decreases immobility by 25.

Description: Reverse one strike per turn for 5 turns.

Effect: Starts the DoT "Rewind" which heals you once per turn for the damage from the hit of your enemy's attack. (If they use a multi hit attack it only counts the final hit to return the damage.)

Description: Turns enemies' damage back to them every round.

Effect: Starts up the DoT "Void" which damages the enemy for the final hit they do to you on the previous turn. (If they use a multi hit attack it only counts the final hit to return the damage.)

Cooldown: Once per battle

Description: Buff to damage against the undead.

Effect: Doubles the damage that you do against undead regardless of weapon type.

Description: Massive attack at the cost of some HP.

Effect: No damage; gives enemy 50 Boost; Unlocks Vengeance skill and sets its cool down to 5.

Cooldown: 5 turns when unlocked by Taunt; 98 turns after use.

"You foolish Dragonlords do not know what you seek. The power is not meant to be yours... not meant to be wielded by such... mortals, as yourselves. You do not deserve the power... the omnipotence that comes with equipping the Doom Knight Armor... the power that infuses you when the DoomKnight Cloak encompasses you or the fel intelligence that awakens in your brain when the Doom Knight Helm is placed upon your head!

The Necrotic Sword should be mine! I have done all that was asked of me! I could have crushed you easily... taken all the orbs... but I bided my time.... This changes nothing! When the times comes I will still rule all, with my dracolich by my side.

Take up the Doom Knight Armor... become one with the darkness within. Can you handle the power? Can you maintain your will as your own? Do you really think yourself as strong as I? As powerful? We shall see...."