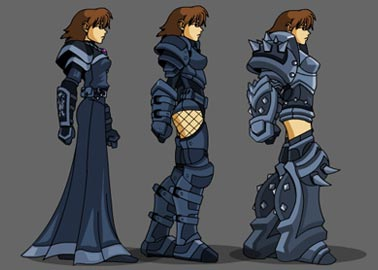 Not actual classes. These are just evil versions of the base classes, Can not be saved as base class.

Only available after buying the ShadowScythe T-Shirt and entering the code for that character. There was a glitch when the Shadow Armor First Came out- people were allowed to save it as their main class, but the glitch has been fixed. The Shadow Armor's Base Weapon is the Shadow Blade and is the evil version of the Base warrior/mage/rogue class.