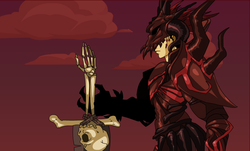 Sepulchure with Necrotic Blade of Doom An evil villain in red DoomKnight Armor with no power since the Mysterious Stranger stole and absorbed his weapon.

Klatu: There... there... there was more resistance than we could have imagined. The defenders defeated my entire army of undead! I fear we have been outmatched.

Sepulchure: Everything is going according to our Master's plan.

Sepulchure: You are dismissed.

Necrotic Blade of Doom: HAHA! HAHAHA! I SAW THEM! DID YOU SEE THEM? MY KIN, THEY WERE ALL ON THE BATTLEFIELD!

Necrotic Blade of Doom: DO YOU THINK THOSE GUARDIANS KNOW WHAT THEY ARE REALLY FOR? DOOM! DOOOOOOM!

Necrotic Blade of Doom: HAHAHA! BY THE TIME THEY FIND OUT IT WILL BE TOO LATE. OH, DID YOU SEE THAT ONE.... THE GOOD ONE?

Necrotic Blade of Doom: YES! KEEP YOUR EYE ON THAT ONE! HARD TO PASS UP TALENT LIKE THAT!

Necrotic Blade of Doom: OH... I NEARLY FORGOT. MASTER ASKED ME TO TAKE A QUEST.

Sepulchure: We've done tests. The moglins healing abilities do not work on the undead. They are useless to us...

Sepulchure: There will be no payment.

Icemaster Yeti: That wasn't part of the deal! I did the job! I got you the moglins!

Sepulchure: We will not pay for useless goods. I'm sure that you can find something to do with them...

Sepulchure: ...You look like you could use a snack.

Icemaster Yeti: Sepulchure, you double crosser! But you did have a point, I AM hungry.

Drakath: My lord Sepulchure, I have returned with the White Dragon Box as you demanded.

Drakath: The priests at the Temple of the Four Winds were no match for your undead soldiers under my command.

Drakath: Please, grant me the power of the Necrotic Blade of Doom as you promised.

Necrotic Blade of Doom: HAHAHAHAHAH! YOU ARE VERY EAGER TO EMBRACE THE DARKNESS, DRAKATH!

Sepulchure: Prince Drakath, you are a FOOL!

Sepulchure: Our agreement was BOTH dragon Boxes! Black AND White! I only see the White Dragon Box before me.

Drakath: There were...complications...with the Black Dragon Box. If you would simply grant me to power I'm certain that I could...

Sepulchure: I think, perhaps, that you are still focusing too much on your energy taking on King Alteon's throne...

Drakath: My throne! The royal seat is mine by birthright!

Sepulchure: BE SILENT! As I have promised, bring me BOTH boxes and the power...and the throne...will be yours.

Sepulchure: Do not interrupt me... or return here without both dragon boxes... ever again.

Sepulchure: Do not fail me a second time, Prince Drakath.

Drakath: Lord Sepulchure, the egg is moving! The hatching time is upon us, at last!

Sepulchure: With the might of this dragon at my command, the world will bow at my feet.

Sepulchure: The age of Darkness begins, as soon as my dragon takes is first breath.

Drakath: But... But the hatchling will only be a baby, how...

Drakath: My Lord, a crack in the shell!

Sepulchure: It is time.

Drakath: Hmmm. That's not exactly what I was expecting.

Drakath: M...Master? What have you done?!

Sepulchure: Is that better my little dracolich? I think I'll call you...

Necromantress: Amazing, he/she defeated BOTH of them?!?! How did he/she find the strength?

Xan: I guess that you have never had something to fight for...

Necromantress: Sepulchure will be... unhappy... with our failure.

Xan: Oh I don't know... Let me tell Lord Sepulchure the bad news. I will take full responsibility for our failure.

Necromantress: ...Very well. I don't know what you're up to Xan, but if you want to take the blame, be my guest.

Xan: Lord Sepulchure, I've got some good news and some bad news. Which do you want first? HAHAHAHAHA!

Sepulchure: I do not have patience for your games Xan. Is it done?

Xan: Yes, my lord. During the confusion, I was able to make the switch and no one in Falconreach even suspects it.

Sepulchure: Good. What of your illusion? Is there a chance that the people of Falconreach will find out...

Sepulchure: ... that one of the people in Falconreach has been replaced with one of our spies?

Xan: There is no chance of it. If I was able to cast an illusian on an entire army making them seem like Light monsters...

Xan: ... then not even Lady Celestia will be able to see through my illusion. The replica is in place and awaiting your orders.

Sepulchure: The two of us are the only ones that know of the replacement but the Necromantress is no fool. She might uncover her real role in this.

Xan: Shall I eliminate her?

Sepulchure: ... Not yet, she is nearing the end of her usefulness, but she has not reached it just yet.

Sepulchure: You have done well Xan. You may return to your plans regarding Warlic.

Sepulchure: Like a rat to cheese... [Character Name], you're so predictable.
[Character Name]: Sepulchure! It's about time you came out of hiding and faced me!
DoomBlade: HIDING?! HAHAHAHAHA! THIS FOOL THINKS THAT YOU HAVE BEEN HIDING IN THE SHADOWS!
Sepulchure: Don't flatter yourself. I've just been too busy to bother with you.
[Character Name]: Well, you're not too busy now. Did someone canel an appointment on you?
Sepulchure: HA! You're funny. No one told me that. No, I'm still a very busy man, but when you recaptured the Wind Orb from my servant Drakath...
Sepulchure: ...I was forced to start to considering you a nuisance, like a insect in my food... an insect to be crushed.


DoomBlade: WHAT? YOU'RE RIGHT, THE HERO IS FUNNY.


[Character Name]: Why do you want the orb? I've seen some of what your undead army can do. You've got all the power any human could ever want.


Sepulchure: You're right. But I'm not exactly human anymore... and my master is nothing like a human.


DoomBlade: ONCE WE HAVE UNITED ALL THE ELEMENTAL ORBS NO POWER ON LORE OR ANY OTHER WORLD WILL BE ABLE TO STOP OUR PLANS!


DoomBlade: WE HAVE ALREADY BROKEN THE PROPHECY! YOU ARE NO THREAT TO US ANYMORE!
[Character Name]: The prophecy is broken?


DoomBlade: CELESTIA HAS TOLD THE HERO NOTHING! HAHAHAHA!


Sepulchure: There was a prophecy which said that there would be born two dragons... one would save the world and the other would destroy it.


Sepulchure: ...the dragon who was ment to save the world became another of my undead servants. At that point, the prophecy was broken.


DoomBlade: THERE IS NO DRAGON TO SAVE THE WORLD. ONLY [Dragon Name] TO DESTROY IT AND Fluffy TO HELP! HAHAHA!


[Character Name]: ...then we will do everything in our power to save Lore from you and your kind! It's our destiny to defeat you, prophecy or no prophecy!


Sepulchure: Believe what you like. My master set all of these events in to motion when mankind was still crawling in caves, hiding from the sun.


Sepulchure: You were a tiny part of the master's plan, and you have played your part. With the prophecy broken, you're just an irritant to be swept aside.


[Character Name]: We'll see about that! The Wind Orb stays on this island as long as [Dragon Name] and I stand in your way!


DoomBlade: DON'T BE IN SUCH A RUSH TO DIE, [Character Name]! HAHAHAHAHA!


Sepulchure: I have no interest in fighting you. It would bore me, so just step aside.


[Character Name]: I've beaten every flunky you've thrown at me so far Sepulchure, and I'll beat you too!


Sepulchure: It's true that you've proven more powerful than even I suspected, but fighting me is suicide. I'm out of you're league.


Sepulchure: I'd rather wait until you've developed your skills. At least then it would be an interesting fight.

Sepulchure: Heh, I gave you a fair warning. You were not ready for me. Now prepare to pay the price.


DoomBlade: HAHAHAHA! NOT THIS TIME SEPULCHURE. WE HAVE WORK TO DO...


DoomBlade: ...AND SO DOES THE HERO. THE MASTER COMMANDS IT, [Character Name] LIVES THIS DAY!


Sepulchure: No. I will not give him this cretin mercy! We will destroy him, NOW!
DoomBlade: ...


Sepulchure: ... No. I obey. It looks like you will have another chance, [Character Name]. Make next battle more interesting for me. Sepulchure (referred to as Drakath!) with Xan.
Retrieved from "http://www.dfwiki.com/index.php?title=Sepulchure&oldid=96801"
Category: