Daggers: One attack with 75% damage

Staffs and Wands: One attack with 25% damage

Swords, Maces and Axes: One attack with 100% damage 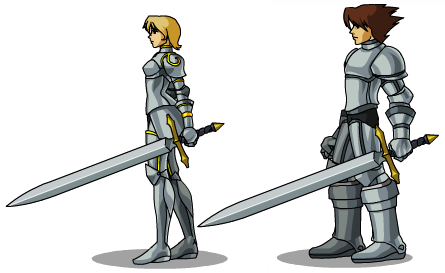 All of the warrior skills.

Description: Available after a successful hit

Prerequisites: Successful attack; will activate even though previous turn had not been used for an attack. For example, if you used it then used Triple Attack, it would have 1 cool down turn left. If that turn was used to either defend or use a potion, the double attack would still be there. HOWEVER, if it was used for an attack that missed, it will not reactivate. And you would have to wait another 2 turns for recoil.

Description: Attack and +20% Damage for 5 turns

Recharge Time: 0; Reactivated when another double attack is completed

Description: Attacks mana instead of HP

Effect: Attacks the mana of the opponent instead of their HP

Effect: Converts attack to Pierce and changes to your weapons element. This means that your DEX will determine your damage bonus, not STR and an extra +75% Damage for that attack

Effect: Attacks enemy for normal damage. Makes opponent unable to attack for 3 turns, no effect if the hit misses.

Effect: Attack all enemies at once, conversion to ranged damage and your weapons element

Description: Stops a foe from running away

Effect: Stops a foe from running away . Gets stronger each time it is used, but takes longer to charge

Description: Attack and +20 to hit for 5 turns

Effect: Single attack that hits for +75% if your base damage

Effect: Attacks like a normal attack, but -20% STR to opponent

Effect: Single attack of 5-5 Metal damage, and causes 3-5 damage to opponent at the beginning of its next turn. Lasts 10 turns. It heals metal type monsters like Bee-Bot (Scaled Level), instead of of a negative number of damage, it will have a healing sign and the number of the negative damage(no negative sign)

Description: Guaranteed Crit + 25% Dmg (can be blocked, dodged or parried)