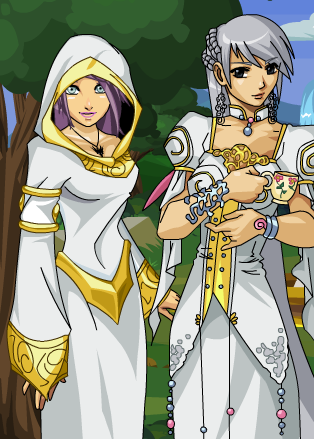 Elysia: <Character>! I think I've done it! It took a LOT of studying and more than a little practice.
Lady Celestia: She's been driving herself to the point of exhaustion for this project!
Lady Celestia: Her dedication on your dragon's behalf shows true promise. I am proud of you ,Elysia!
Elysia: I've managed to recall the essence of some of your prior titan fights.
Elysia:Your dragon's bravery has left an imprint in time that I can trace... if I concentrate REALLY hard.
Elysia: It's time we continued <Dragon>'s training, and I think this is the best way to do it.
Lady Celestia: Good luck, <Character>. I'll be watching the training, but I have complete faith in you, <Dragon>, and Elysia!

<Character:> Elysia, what is this place?
Elysia: If this cave had a name, then the DragonLords have long since lost it. But it should be more than adequate for our needs.
<Character>: Can you tell me what's inside the cave?
Elysia:The magic in this cave will find the greatest challenges you and <Dragon> have faced.
Elysia: And bring them back to destroy you.
<Character>: So...
<Character>: Why are we here again?
<Character>: Forgive me priestess, but the darknesses in my past? Are probably better off left defeated.
Elysia: The harder the challenge, the stronger you become. The cave will help you unlock powers you and your dragon didn't know you had.


You enter the cave

Elysia: The rage of the Pyromancer.
Elysia: Xan is one of the greatest opponents you have - or ever will - face.
<Character>: You don't have to tell me that twice!
Elysia: Good. Then I won't need to repeat myself.
Elysia: Defeat Xan to further the training of <Dragon>!

Elysia: The might of Exodus.
Elysia: You have faced Exodus before, and you have not.
<Character>: ...How does THAT work?
Elysia: Spacetime is a funny thing. Try not to think about it to hard.
Elysia: Defeat Exodus to further the training of <Dragon>!

Elysia: The ferocity of Gorgok.
Elysia: One of the first titans you and <Dragon> faced together.
Elysia: Battling Gorgok should bring back memories for yo and, in the revisiting, teach you new tricks!
Elysia: Defeat Gorgok to further the training of <Dragon>!

Elysia: Well done, <Character>! And you too, <Dragon>!
Elysia: <Dragon> should be noticeably stronger now. Can you feel the srength emanating from him?
Elysia: The next time you battle together, you should notice he has much more power and a new trick or two!