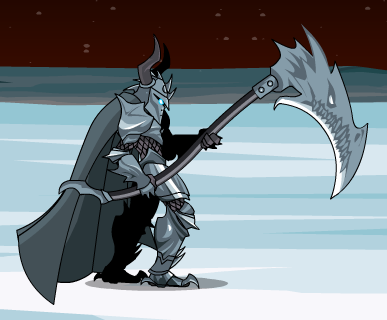 A Dragonmaster who is planning something ... involving a small army of Ice Dragons.
He is often seen with his pet dragon, Galaisaurus.
See: Dragonmaster Frostscythe (Scaled Level) for his battle stats.

<Character>: WOW it's cold out here. So where is this guy anyway?
<Character>: HEY DRAGONMASTER FROSTSCYTHE...crawl out of your ice cave and face me!


<Character>: ...yikes...I forgot how big you were.
Frostscythe: FOOL!! YOU dare come here, to my own realm and face me??!
<Character>: Well since you're SCARED to come back to Falconreach, you didn't leave me a lot of choices.
Frostscythe: Are you calling me a coward!? You will pay for this insult!
<Character>: Hey, I don't want to tell you how to live your life, but yelling in THAT helmet could cause permanent hearing loss.
Frostscythe: WHAT?!
<Character>: See? It's already happening.
Frostscythe:: If YOU are the best the GUARDIANS have to offer, perhaps it is time to go back and conquer that tower once and for all.
<Character>: Eckhard was right, you ARE still a threat to Falconreach... Ok, your plans stop here Frostscythe!
Frostscythe: Glaisaurus, I command you to my side! 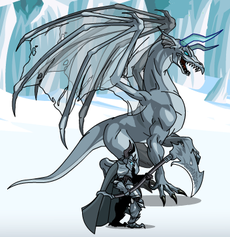 Twilly: We did it! We won!
<Character>: Not yet Twilly. We still have not faced the Dragon and Dragonlord behind...


<Character>: and Twilly: Woah.
Frostscythe: Give the Orb to me now and I shall make your deaths swift.
<Character>: Orb? What orb? I dont know what you are talking about.... who are you?
Frostscythe: I do not have time for this...
Twilly: Is he a Dragonlord?

Zorbak teleports in out of nowhere


Zorbak: Meh... cast the wrong teleport spell. where am I?
Frostscythe: Zorbak!
Zorbak: ! Dragonmaster Frostscythe how... meh... good to see you again!
Twilly: only a dragonMaster? whew... he has not become a fully fledged DragonLord yet... his dragon will not be full strength.
Frostscythe: Enough of this! Prepare yourselves! I will have the orb!
Zorbak: Meh heh heh heh.... this is going to be good. Later!


Option to fight Glaisaurus and Dragonmaster Frostscythe in normal or extreme mode.


Frostscythe: Defeated? How is this possible? You broke my Dragon Amulet! Without it Glaisaurus is useless to me!
<Character>: Now tell us... why did you attack this town?
Frostscythe: HA HA HA *sneeze* you do not know what you are even defending? *cough*
<Character>: ?
Frostscythe: you will discover it on your own soon enough... *cough* I did not realize *sneezes* who you were.
Frostscythe: Had I known *coughs* that you are <Characters name>... I would have brought a much larger army. *Aaaaachoooo!*
Frostscythe: You may have forced me to start over, but know this... I WILL become the next Dragon Lord. *sneeze*
Twilly: Did the big frost boss guy just catch a cold?
<Character> and Twilly: *Chuckles*
<Character>: *Aaaachooo!*
Twilly: !