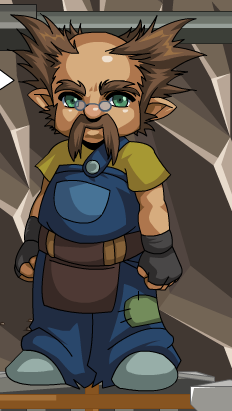 Yix is located inside Popsprocket, on a crate in the same screen where you land when travelling from Falconreach.

Yix is the Acting High Technocrat of Popsprocket (normally the Head of Maintenance), and one of the few gnomes standing against the army of Cyklon robots.

Yix: I'm glad that you're here, <Character>. I will not rest until our city is ours again.


QUESTS
Yix: With your help, we'll win Popsprocket back from those robotic monsters yet!


TALK
Yix: Oh good! You have questioning! Ask anything that you want!

Yix: I am Yix, acting High Technocrat of Popsprocket.
Yix: Our normal High Technocrat has fled the town along with most of the other residents and researchers.
Yix: So have the other 37 people ahead of me in the chain of command...
Yix: Actually, I'm the head of manteinance normally but this is my home and I won't abandon it!
Yix: I'm not much of a fighter but I know every project underway in Popsprocket...
Yix: And if one of the nozzles is clogged in the soup machines, I'm the gnome for the job!

Yix: You've never seen a gnome before? What do you do with your time?
Yix: Gnomes are similiar to dwarves physically... we're a little shorter and not as stocky, but our brains couldn't work more differently.
Yix: Gnomes are impossibly curious. Naturally inquisitive minds make us excellent researchers, engineers and inventors.
Yix: Sadly our curiosity tends to lead a lot of us to... unusual ends. Did you know that more than 70% of all gnomes die in mechanical explosions?
Yix: Popsprocket is our main city in this part of the Lore but gnomes aren't afraid of travelling. We have camps and towns all over the Lore.
Yix: We may not be the tallest race but you'll find that most of us are as loyal and fearless as we are curious!
Yix: You're almost always in good company if you have a gnome for a friend.

Yix: Popsprocket is the main gnomish city in this part of the world. It is a center for research, scientific and technomagical study.
Yix: Most of the residents are gnomes but we are open to all races who wish to further the cause of understanding.
Yix: Not too long ago we have a human inventor studying us but he turned his back on us when he dedicated his life to dentistry.
Yix: You may wonder why the city is flying. Well, the Aeris Battlespire came to us when they wanted to become a floating city.
Yix: A team of researchers found that heating Ahzite ore gives us anti-gravity properties... but they went a little overboard.
Yix: Now we have to keep Popsprocket chained down or we'll fly off into space. Wouldn't that be fun?! But we're not prepared yet.

Yix: Mechagius Balthar... That wease! He was a low level researcher here in town only a few weeks ago.
Yix: He was doing grunt work for Section 13, mapping the old steam tunnels that worm their way through Popsprocket...
Yix: Suddenly he starts making these robotic minions that he calls his Cyklon Army. These machines are WAY out of his league.
Yix: Personally, I believe that he found the long lost Elemental Orb of Energy.
Yix: The legends say that it was found when Popsprocket was built on the remains of an Ancient Guardian Tower.
Yix: Anyway... With the power of the Energy Orb who knows what kind of calamity that boltbrain might cause!

Yix: The day I sent you the letter asking for your help a few flying eyeballs were seen around town.
Yix: I can't say for sure who was behind these Eyeballs, but if Sepulchure is looking for that orb too...
Yix: ...Then this situation could be even more dire than I first thought. We need to get to work!


Yix: A working knowledge of gnomish magitech will take lots of studying, <Character>...
Yix: When you're ready to become a Technomancer, I will be proud to have you use some of my inventions... But you're not ready yet.