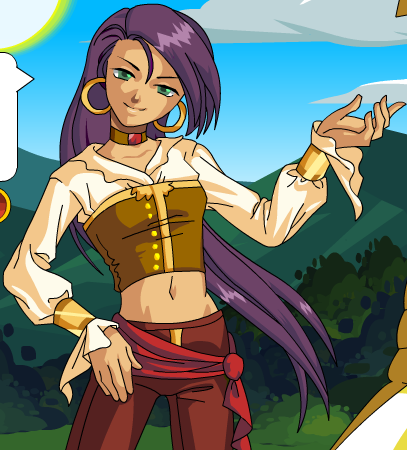 Valencia is located east of Falconreach, one screen right from Surewould Forest's entrance.

Valencia is a world class rare item hunter! No item is too rare; no quest too dangerous for her. She attempts to sell you a giant golden Cysero statue for 1 billion gold.

Valencia: Why hello there Adventurer! I'm Valencia, world famous rare item hunter! Could I interest you in this rare statue? Only 1 Billion gold!


QUESTS
Valencia: I live my life by one simple code. There is no item too rare and no quest to dangerous!

Valencia: A huge Vultragon stole the egg? I bet is was "Ultra-Vultragon!. He lives at the top of... Mt. Moordoor!

Valencia: Moordoor? It is a deadly mountain of treasure and the bane of a door to door salesmen everywhere! A huge Vultragon lives at the top.

Valencia: Vultragons? They are wretched scavengers that steal and eat other's eggs. Their eggs look very similar to Dragon Eggs.

Valencia: All 5 of these eggs look identical, I am unable to tell them apart. Hmmm, you should take these to your little red Moglin friend. Good luck!

Valencia: Pops left some old maps and one leads to an ancient temple near here! <Character>: Temple? Valencia: It's said that the people who lived there were unified from three tribes and created a golden idol to celebrate that. Valencia: Their temple was overrun though, and the idol broken. Now it lies in ruins covered in creepy-crawlies! Valencia: If you go and kill all the monsters maybe you can put the idol back together!

TALK
Valencia: I live my life by one simple code. There is no item too rare and no quest to dangerous!

Valencia: Hunting Rare Items? Each item has a rarity value. Items that only appear once, like unique war rewards, are the rarest of all.

Valencia: I heard that the citizens of Falconreach recently came into a lot of gold. I tough maybe they might like to purchase this one of a kind item.

Valencia: Rumors? I hear the 'Lady of the Cake' and Ring to Rule the Mall' quests are coming. I do believe the creators are quit insane.

Valencia: I am up for adventure as long as there is a rare items or lost treasure involved!

Bringing Home the Bacon
He's(a) Lyin'
Purebred Protests
It's a Wash
Heart of Gold
Outnumbered
(Mino)torture
No Horsing Around
Frenzy at the Forge
Don't have a kow
Queen of the Jungle
Triple Threat?
Garden of Good and Ebil
Inside the Garden
The Secret Revealed
Grrrberus' Revenge