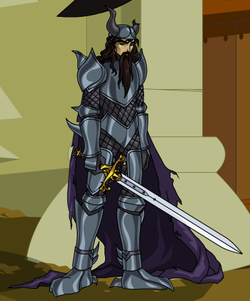 Ah, welcome adventurer. I am Sir Baumbard and this is Glumbert, my dragon.

Sir Baumbard: I am one of the elite order of Dragonlords. We are protectors of the realm and will not hesitate to answer the call of those who need us.

How do I quest for a dragon?

Sir Baumbard: Speak with Captain Rolith in the Keep when you have earned enough experience (lvl 3).
Sir Baumbard: Your quest will take you to Falconreach to the east where the small red moglin, Twilly, will guide you on the rest of your journey.

Are you a Pactagonal Knight?

Sir Baumbard: I was once of their order.
Sir Baumbard: I never attained the rank of Knight with them, though, as my family name didn't work with 'sir' in front of it like the Prizes or Chandestroys.
Sir Baumbard: My knighthood was bestowed upon me by the great King himself.

Why are you here?

What can I do here?

Sir Baumbard: The weapon shop and Inn are in the interior of the city. If you seeking more training, then you can find Armory.
Sir Baumbard: If you venture into the dephts of the city, you may even find Channiru visiting the prisoner...

Why is the city here?

Sir Baumbard: For security... urp... the city piloted by our Dragons... it is... mmph... constantly in... motion.
Sir Baumbard: As the most... urp... senior Dragonlord... in the region... it falls me to... coordinate efforts...
Sir Baumbard: and... mmph... inform the head guard Channiur of the dangers in the arena.
Sir Baumbard: The city... moves... I look forward to the time I... urp... will get to spend on the ground in Oaklore... It's better... when I think of solid ground...
Sir Baumbard: Dragonsgrasp shall be in the sky over Falconreach... mmph... for a while though.