Run of the Kessel! 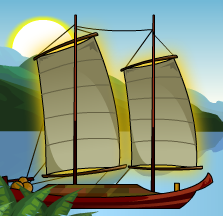 Released: November 9th 2007
Level Required: Any
Location:Thyton, in the Shadow of the Wind Village
Monster List: Bonny Lass (Scaled Level), Buccaneer (Scaled Level), L.D. Monkey (Scaled Level), Pirate Monkey (Scaled Level), Unlucky Pirate (Scaled Level)
Rewards:Kessel Dagger,Kessel Staff,Kessel Sword, Unlocks The Hunt Begins!
Info: You have 125 seconds to reach the end of the sea, while avoiding other boats. When the Kessel comes into contact with another boat, a battle will begin. Winning deducts 5 seconds off your time, losing causes you to restart at the original screen.
Tips: The closer the Kessel is to the right side of the screen, the faster your boat moves, but the more likely you are to hit another ship.
References: The quest's name is a reference to the Kessel Run, a smuggling route in the Star Wars universe which Han Solo claims to have made in "less then twelve parsecs".

Released: November 16th 2007
Level Required: Any
Location: Yulgar, in Yulgar's Store
Monster List: None
Rewards: None
Info:A customer of Yulgar's wants a new weapon, and as his new apprentice, it’s your job to make it.
Tips: Each icon uses a different name for each creation

Reens sending you on quest for reagents.

Once the reagents are gathered, Reens will show you a pattern on a Transmutation circle. Your job is to remake the pattern.
As you alchemy level increases, so does the difficulty of the pattern, the amount of lines, and amount of patterns to complete varies depending on your alchemy level.

Potions will heal more as you go up in your Alchemy skill level.
Your max alchemy level is your level + 1. However it is possible for a level 4 character to pass the first test and get to level 6 in Alchemy, but no higher than that. 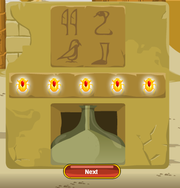 Light the 5 scarabs before time runs out!

Released: January 25th 2008
Level Required: Any
Location: Zhoom, in The Sandsea
Monster List:Scar Scarab (Scaled Level), Sunspike (Lesser) (Scaled Level), Sandslicer (Scaled Level)
Rewards:Blade of the Blue Lotus, Lotus Blade, Mummy's Curse,Mummy's Torment,Scorpion Stinger,The Ruby Scorpion, Unlocks The Blue Lotus
Info:In The Hard Way, there are puzzles blocking you progress. It is your duty to figure out the correct 5 symbol combination with the 4 hieroglyphics.
Tips: The pattern remains constant throughout the puzzle. So if the bird lights up the first scarab, it will be the first part of the combo.

Released: March 7th 2008
Level Required: 2
Location: Sir Baumbard, outside Oaklore.
Monster List: Necroslime (Scaled Level), Slime (Level 1), Bone Fire (Level 19) possibly?
Rewards: Defender's Medal
Info: An undead army is trying to invade Oaklore. But Sir Baumbard has arrived to stop the undead with his light bombs.
Tips: There are 10 waves of monsters to defeat. Drop a light bomb anywhere on screen and the blast will send waves in a circular pattern. Any wave to hit a monster will kill that monster. Kill the amount of monsters needed or more to advance to the next level.
The only way to receive the Defender's Medal is to defeat all waves.

Released: April 4th 2008
Level Required: 2
Location: Artix in The Necropolis.
Monster List: 4 unidentifiable monsters
Rewards: Batwing Helm, Boo Burry's Helm, Champion of the Light, DeathStalker Helm, Kepi of the Green Gnome, REALLY Special Dragon Chow
Info: An undead army is trying to invade Moonridge. But you and your dragon arrived in time.
Tips: There are only 10 waves of monsters to defeat. Drop a light bomb anywhere on screen and the blast will send waves in a circular pattern. Any wave to hit a monster will kill that monster. Kill the amount of monsters needed or more to advance to the next level. Released: August 15th 2008
Level Required: 3
Location: A Cold Reception.
Monster List: None
Rewards: Giant's Shoestring, Dragon Molt, Fallen Hero's Chain
Info: Galanoth asked you to make him a favor: Discover where his necklace is hidden.
Tips: There are 3 waves of puzzles, and when you finished all of them, you see a necklace with a picture of Galanoth's father and mother. The saga has a chance of an AdventureQuest crossover. Released: April 3rd 2009
Level Required: Any
Location: Fishing in FalconReach Bay and the Let's Go Fishing button in Falconreach; Amityvale rightmost area
Monster List: None
Rewards: Gold
Info: Click anywhere on the screen to start fishing! Once you have begun fishing, watch the cork bobber carefully! You may get a few NIBBLES, but you have to wait until you get a BITE or you'll scare off your fish! When you see the cork bobber going crazy then you've got one hooked! Click anywhere on the screen to reel in your fish. Some fish are trickier than others and might slip off the hook. The higher your RANK is, the less this will happen! Right now you can catch 20 different fishes in Falconreach, and 40 in Amityvale. You can see everything you have caught in your AQUARIUM at any time. There are some rare fish worth 150-120 points! Things that are not fish (Like boots and sticks) are only worth 5 points! Good Luck!
Tips: Fish are more likely to be caught if you see more water surrounding the cork bobber than usual. The rest is basically luck!