Lady Vayle: Impossible! This cannot be that little boy I met during the ...
Artix: Could this be the same Vayle I met when I was a little boy?


Sally starts poking something under the stage with a stick


Giant monster bursts from under the stage


Giant pole falls towards Lady Vayle, but Artix intercepts it, holding it up.

Girl: Help! Someone, please, help me! Brother ...!
Artix: That is coming from the river! I AM COMING!
Artix's Voice Over: I ran to the river as fast as I could ...


Artix slips and falls into the river


She lowers her arm off her face


Girl: I... Don't know.
Artix: The river must have washed us up in this cave ... You are from my village, right?
Vayle: I'm Vayle. Yeah, I live in the village too ... with my brother.
Artix: What about your parents?
Vayle: They're ... dead. It's just me and my brother now.
Vayle: We look out for each other. He'll be worried if I don't come home before sunset.
Vayle: He's the strongest, bravest best brother ever. If he was here, he would know how to get us out of this cave. *sob*
Artix: Do not worry Vayle. My name is Artix ...
Artix: I will get you back to your brother as soon as I can! I think I see a tunnel over there.
Artix: There is no need to be scared. Follow me, I will protect you!
Vayle: O..*sniff* Ok.


Vayle walks toward the blue light


Artix: Vayle ... come back. We should leave!
Artix: Do not forget about your brother! He will be worried!


Artix walks over to her


Artix's Voice Over: I knew exactly where we were as soon as I saw the chamber...
Artix: This looks like ... the old Guardian Tower. We should not be here!
Artix: Are you alright? What ... what happened to you?
Vayle: I'm fine, I think. I just touched that orb ...


Artix lifts the orb up


Artix lowers the orb to the ground


Vayle is about to touch the orb again

Artix Vs. The Undead

Artix brings out large hammer
Artix: Now we have you! Let us see who hides beneath those purple robes!
Artix: ...!!!'
<Character>: You're unveiled Vayle!'
<Character>: I have to admit, I saw that coming.'
Vayle: YOU... YOU ANIMALS!'
Artix: Us?'
Vayle: You destroyed my brother! I have kept his spirit safe in his spiritcrystal for YEARS... ever since... that night!'
Vayle: I was so close to getting Noxus to teach me to bring him back...'
Vayle: but I used his spirit to animate that undead and you DESTROYED HIM and THE SPIRITCRYSTAL!'
Vayle: Now his spirit is gone... forever! It's all your fault!'
Artix: Vayle, if what you say is true then you have been keeping his spirit captive. The spirits of the dead long to move on.'
Artix: Noxus was lying to you when he said that he would teach you how to get your brother back.'
Artix: His life force was really captive all those years then there was probablynoting left of your brother to...'
Vayle: NO! YOU LIE! I LOVED my brother Edgar, and YOU destroyed him... I HATE you, Artix: I HATE YOU!!!'
Vayle: Noxus was right. I should have destroyed you when I had the chance.'
Artix: Vayle...'
<Character>: Please Vayle, listen to Artix...'
Vayle: I was holding back because of what happened when we were children, but that's over now...'
Vayle: I will avenge my brother if it is the last think I do. You will pay... BOTH OF YOU WILL PAY!'

After the cutscene where Noxus Explains eveything to <character> and Artix...

Vayle: I'VE HEARD ENOUGH!
Vayle: All these years... I TRUSTED YOU! YOU HAVE BEEN USING ME!!
Noxus: Vayle! You misunderstood me. Let me make it clear to you.
Vayle: No more of your LIES, "Master" Noxus!
Vayle: <Character>, And I can never forgive what you have done ... there still may have been hope ... but let me help you finish Noxus.
Vayle: With all of our power combined, this slug cannot possibly stand against us. 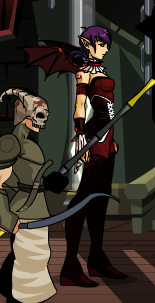