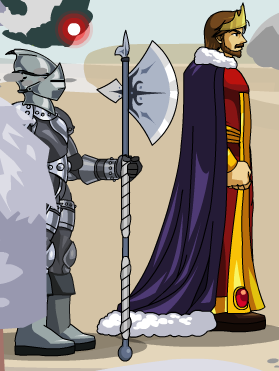 King Alteon: Well my <Your Class>. It is an honor to finally meet you. I have heard many tales of your adventures.
King Alteon: Today you have done the entire kingdom, a great service. The bards will sing of this day.
King Alteon: I knew you would do the right thing... you are someone who can be counted on in the dark times ahead.
King Alteon: During your encounter with Icemaster Yeti were you able to discover who was behind this?
<Character>: Yes, I overheard the name Sepulchure. I believe this person was attempting to use the moglins to make healing weapons.
King Alteon: Indeed.
<Character>: It does not seem like it worked, Sepulchure broke the deal right as I arrived.
King Alteon: Interesting. I am often amazed by the unthinkable convenient timing of events in RPGs.
<Character>: What?
King Alteon: Hmmm, never mind that. Let us keep this between ourselves. I will see what I can learn of this Sepulchure.
King Alteon: I will send you an invitation to my Castle in Swordhaven once I have returned from this journey.
<Character>: Journey? Will you be long?
King Alteon: *Smiles* I shall not be gone too much longer. There is someone I must meet with. I am happy that Frostvale was on the way.
King Alteon: Now is a time of celebration, all in your honor. Happy Frostval <Character>!
Frost Moglin: Thank you <Character>! You're the whole town's hero!