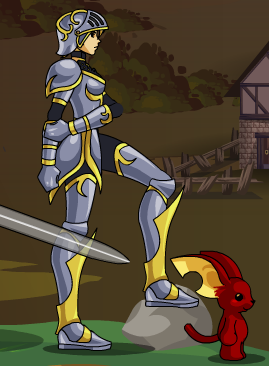 On top of a hill outside of Willowshire during the Dragon Assault on Willowshire.

After finishing the "Mission" quest she is located in the camp inside Willowshire.

A Guardian who was stationed at the Guardian Tower of Earth in Willowshire.

Player: What is the situation?
Guardian Fortuna: They attacked without warning. The focus of their attacks seems to be the Guardian Tower!
I was instructed by the Tower Commander to get as many villagers out of town as possible and call for reinforcements.
But when I got back.... the Dragon and his army had already reached the tower!
Twilly: Twillies brought as many people as Twillies could!
Robina: I will do what I can to help!
Ash: Let me at those Dragonheaded goons!
Guardian Chuck: You can count on my blade!
Guardian Steve: My spells are ready for battle!
Guardian Bruce: I am ready for the hardest, toughest, most dangerous and crayziest missions you can throw at me!
Player: I am at your service as well.
Guardian Fortuna: <large red exclamation mark over head>
By the light.... you are <insert player name>! If you are here, we can retake the town. Your fellow adventurers are already down there.
There are a lot of us, so if we run strategic missions we can help those who are trapped and push back the invaders!

Mission - Starts "Defense of Willowshire"-Warquest
Team up! - Robina and Ash join as guests