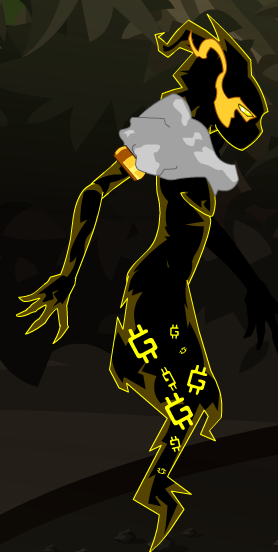 The Corrupted Elemental Spirit Greed is yellow-black and has what appears to be signs simulating the $ sign as part of his form. He intends to get through the Equilibrium Gate, and finds Tomix and the hero annoying and meddling.

He has a loyal, if young, subordinate called Greedling.

The real enemy in Ravenloss is Greed If players continue the attacking the ChaosWeaver Greed is sure to get the Judgement Wheel in the war ChaosWeaver are just a pest Moderator's do that so players will mistake to attack the ChaosWeaver.

Everything he says is important.