Grams could be found in her Petshop in Falconreach. After the events of the Spy Saga, Aria, her granddaughter Aria took over it.

Grams is the owner of the Petshop, a pet tamer and Aria's grandmother. Later on, we see that she was captured by Sepulchure, and is replaced by a spy. The spy, Sabrina, was then sent to Falconreach, to spy on Falconreach's heroes. Meanwhile, real Grams is in Sepulchure's fortress, keeping company to Gravelynn. But then she was killed by Sepulchure for destroying his fortress.

You can buy following pets in Grams' shop:

You can also upgrade your pets.

Through this option you can visit Aria in the back of the shop after you've successfully rescued her.

Through this option you'll start the Critter Cave quest where you have to "rescue" Aria.

After successfully finishing this quest you'll be able to tame pets for Grams which she'll store in her shop where you can take them with you whenever you want!

These are the follow-up quests which are available after you've successfully rescued Aria from the Critter Cave: 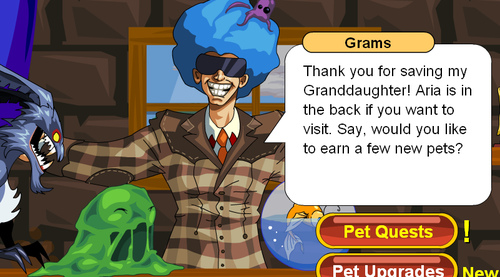